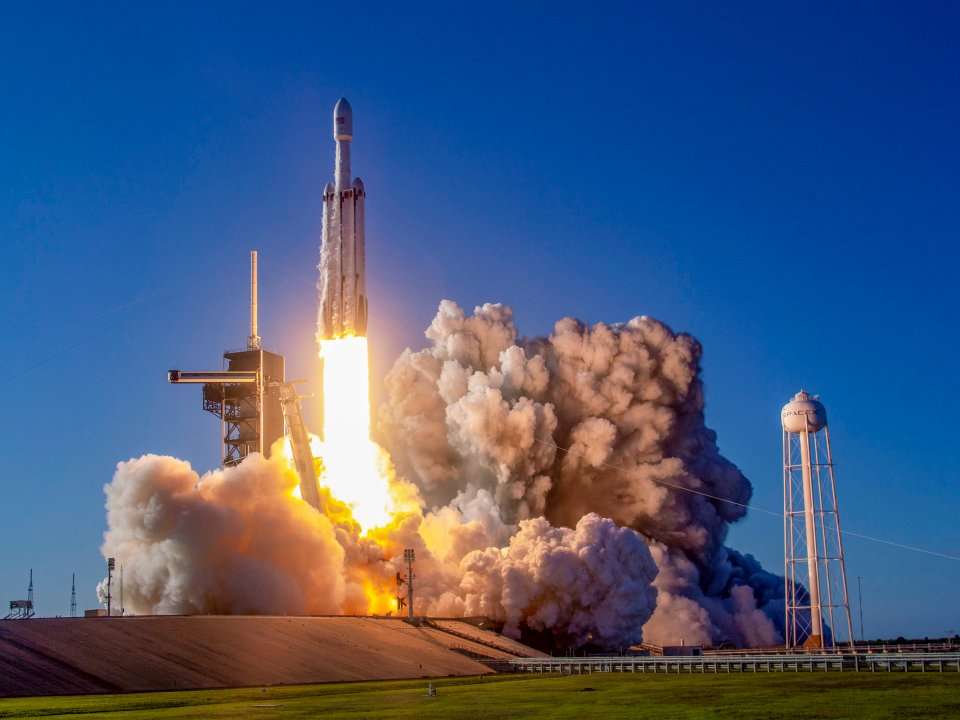 SpaceX is about to launch 152 dead people’s remains into orbit aboard a Falcon Heavy rocket Dave Mosher Jun 22, 2019, 18:21 IST SpaceX’s second-ever Falcon Heavy rocket launches the Arabsat-6A communications satellite from NASA’s Launch Complex 39-A at Cape Canaveral, Florida, on April 11, 2019. SpaceX via Flickr On June 24, SpaceX plans to launch its third Falcon Heavy rocket – the world’s most powerful operational launch system – and send 24 different satellites into orbit. One of the satellites will carry 152 metal capsules packed with human ashes. A company called Celestis arranged the “funeral flight” and charges upwards of $5,000 to fly 1 gram of “participant” cremains into orbit.

Celestis has arranged the launch of cremains from engineers, astronauts, authors, and a even Star Trek actor. Visit Business Insider’s homepage for more stories .

SpaceX is gearing up for the third-ever launch of its Falcon Heavy rocket: the world’s most powerful operational launch system .
The mission, called Space Test Program-2 (STP-2), is slated to lift off between 11:30 p.m. ET on June 24 and 2:30 a.m. ET on June 25, weather permitting.

When it does, the rocket will propel 24 satellites into orbit around Earth – as well as the ashes of 152 dead people.
The launch of cremated remains is facilitated by a company called Celestis Memorial Spaceflights, which purchases available room on spacecraft, installs a container, then packs it with small metal capsules filled with ashes. It refers to these as ” participants .”
But for these ashes to enter orbit as intended, SpaceX first has to pull off what Elon Musk, the rocket company’s founder, has called -2 “our most difficult launch ever.

”
The variety and complexity of the two dozen satellites and their payloads is to blame: The various spacecraft have to be deployed into several different orbits using multiple engine burns, according to SpaceX . One of the satellites being launched holds NASA’s Deep Space Atomic Clock , which may change the way robots and astronauts navigate through space. Another has the Planetary Society’s LightSail , an experiment that could change how vehicles propel themselves to a destination.
The ash capsules are stowed on the same spacecraft as NASA’s clock.

How SpaceX is launching human ashes into orbit An illustration of the Orbital Test Bed satellite, which contains multiple experimental payloads – and human ashes. General Atomics SpaceX has launched cremains into orbit before, but the company doesn’t work directly with families to memorialize loved ones by flying their ashes into space.
That responsibility goes to Celestis. Since its founding in 1994, the company has flown cremains on 15 different rockets: eight up-and-down suborbital flights, six into orbit around Earth, and one that crashed into the moon .

Current and future “participants” include children, space enthusiasts, scientists, engineers, astronauts, authors, and more. For example, Celestis flew some ashes of geologist and planetary scientist Eugene Shoemaker to the moon in 1998, and took the remains of “Star Trek” actor James “Scotty” Doohan into orbit in 2008. (Doohan’s ashes also launched to the International Space Station in 2012, and even more await a future ” Enterprise ” flight into deep space.) The location of a sleeve of Celestis capsules filled with the ashes of 152 different people on the Orbital Test Bed satellite. General Atomics
For SpaceX’s STP-2 mission, Celestis bought spare room aboard the Orbital Test Bed satellite, which is also flying NASA’s experimental atomic clock (among other payloads).
The Celestis payload is flat metal sleeve.

Technicians glued each of the 152 capsules inside the sleeve, then bolted it to the upper deck of the satellite. A technician inserts Celestis capsules filled with the ashes of 152 different people on the Orbital Test Bed satellite. General Atomics
Not every capsule is the same size or weight: A family can choose to fly between 1 gram and 7 grams of ashes (between a US dollar bill and a US dollar coin’s worth of mass). “The Gemini capsules house two individuals at 1 gram each. The Flight Module houses 7 grams of one individual,” a spokesperson for the Smithsonian Channel, which is producing a documentary about Celestis called “Heavenly Bodies,” told Business Insider. “Most people select to fly 1 gram in a single capsule.

Many capsules have tombstone-like sayings etched into them. An inscription of one capsule flying aboard the upcoming STP-2 mission flight reads “Reach for the stars!” and another says “Space Truckin’ Forever.” The capsule of a now-deceased couple says: “THEY LIFT OFF TOGETHER!” Capsules filled with the ashes of 152 different people is scheduled to launch aboard one of SpaceX’s Falcon Heavy rockets. Surrey Satellite Technology US
Prices to send ashes into space start at just under $5,000 for orbital flights, according to Celestis’ website, while deep-space and lunar flights begin at $12,500.
If that doesn’t strike you as an appealing end-of-life option, there are an increasing variety of alternatives to traditional burial and cremation. More and more US states are permitting preservative-free “green” burials , while others now allow body composting and even dissolving corpses with alkaline hydrolysis .