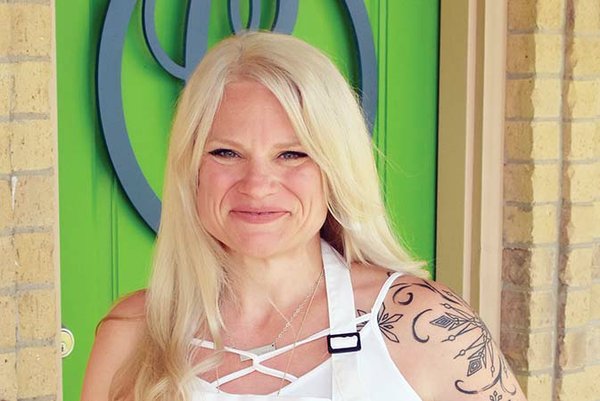 Crystal Certain knows who she is.
She’s an award-winning Conway High School art teacher, but sometimes she’s a Disney queen, a mermaid or a dinosaur.
“I am unashamedly kooky,” she said.
Certain, who grew up in Sherwood, is an only child.

Her inspiration was her mother, who taught art at Fuller Junior High School in Little Rock, which Certain attended.

When Certain was about 8, her parents divorced, and she lived with her mother.

“We’ve been a team for a while,” Certain said.

Certain briefly tried to go a different route than art education. She considered the medical field.
“I love science.

I am a fully rounded nerd,” she said, laughing.
She only went one semester at the University of Central Arkansas in Conway without taking an art class.

“What are you doing? You need to be an art educator,” said Jeff Young, one of her art professors at UCA.
“I said, ‘You’re right,’” Certain said.
Certain, a married mother of three boys, has a heart for all students, but particularly those who struggle in some way.
Her first teaching job was at Bigelow, where she was the first full-time certified art teacher in the district.

She inherited 7 gallons of glue and some dried-up markers. That’s how she became an expert in art projects that involve glue — case in point are the papier-mâché pigs her Conway students make each year.
While she was teaching in Bigelow, she helped start a program where every student got a Christmas present, regardless of their need. And there was a lot of need in the high-poverty school, she said.

“It was a great place to work; it was like a family,” Certain said.

She came to Conway to teach art at what was then called Conway High School-East and to teach for one hour a day in the alternative learning environment.
“Those are my babies,” she said of the ALE students. She said students in that program have difficulty functioning in a regular classroom for a variety of reasons.
“They’re not bad kids,” she said.
Certain said she learned a lot from those students, too.
“Their capacity for love was so amazing to me,” she said.
She recalled that one day she brought homemade cupcakes for them, and a student asked, “Where did you get these?” When she told him that they came from her house, he didn’t believe her.

“It was not part of their lives that there were people making cupcakes with them. It hit me in the gut,” she said.
Certain said showing her students love is the most important part of her job.
“I have a passion for art — absolutely, all day long — but that’s not why I show up every day,” she said.

It is her compassion that led her to start a classroom food pantry.
“I went to some in-services … and found out Arkansas is second in the nation in food insecurity. One in four children go to bed hungry,” she said.

“I was that kid.”
Certain said that when her mother had cancer and was unable to work while undergoing chemotherapy in 1994, times got tough. Her mother’s co-workers at Fuller stepped up.
“Some teachers showed up and filled our pantry and freezer. That weight just lifted off my mother,” Certain said. “I stand on the shoulders of giants.”
Her mother now lives in their pool house, which is like a small apartment.

The Certain Little Free Class Pantry started with snacks on a couple of shelves and grew to half her large closet. Her kids named the pantry.
“They think my last name is hilarious,” she said.
At one point, she fed as many as 400 kids in a day.
Teachers often keep a drawer of snacks as “an invisible safety net,” Certain said. Five other teachers in other Conway schools have “micro” pantries that are filled by the primary pantry and supplemented by those teachers.

Certain has a Facebook page devoted to the pantry, too.
Certain said she has gotten support from board members and administrators.
“I thought it was a wonderful idea,” said Amy Ferdowsian, a member of the Conway School Board, “because there are so many kids in the school system that don’t have the food they need to be able to focus in school and do what they need to do.
“I love her mentality about it that anybody who needs it can get it. Everybody gets it, regardless.”
Students don’t have to prove they have a need.

During the summer, the Certain Little Free Class Pantry program is run by the Community Action Program for Central Arkansas in Conway. Certain donates to the program the food left in her classroom, and she has a wish list on Amazon, as well as a donation box at Kroger on Salem Road in Conway.

Certain said she kept a spreadsheet of the pantry’s use, and it showed that use spikes right before parents get their food stamps.
“That’s when they run out [of food],” she said.
Students also share their stories with her. She said one student said he didn’t eat enough at home because he wanted to “make sure his brothers and sisters ate first.”
She tries to imagine having to look into her children’s eyes and tell them there isn’t enough food.
“That is absolutely horrifying,” Certain said. “Kids who are hungry don’t learn.

The boys help with the school pantry, whether it’s shopping for food or carrying the sacks to the pantry.

Certain said she and her husband emphasize doing what they can to help others.
“Kindness matters,” Certain said.
That goes for her classroom, too. Students are not allowed to be mean about another student’s artwork, and she said she makes sure the conversations stay “classroom-appropriate.”
“My No. 1 rule is to maintain a positive classroom climate,” she said.

Her devotion to students has been noticed. She was named Conway High School Teacher of the Year for 2019. Although she didn’t win the district honor, being nominated by her co-workers meant everything, she said.
“It is really, really nice that the people I work with every day valued and appreciated me enough to do that. I work with some amazing professionals,” she said.

Certain’s role as Elsa was not something she dreamed up herself.

One day, she wore her hair braided on the side, and the students called her Elsa, the blond-haired queen from the Disney movie Frozen.
The movie’s theme resonated with Certain.

At the end, Elsa learns that love is the most important thing, Certain said. Also, Elsa wasn’t just a princess; she was the queen.
“Well done, Disney,” Certain said, clapping as she sat on her living-room couch.
When all the teachers on her hallway at school dressed up like Frozen characters, Certain bought a $30 Elsa dress to wear.

Then she invested in a theme-park-worthy Elsa costume, and she posted on Facebook that she was available to volunteer at events. She’s appeared at several, including the Arkansas Children’s Hospital Superhero Dash and Bash.
“I like sparkles,” she said. “My favorite colors are light pink and black, … and I think motorcycles are cool. For a long time, women have been put in a box. Once in a while, it’s fun to put on something sparkly.”
She also likes ink.

Her left arm has a trail of flower tattoos, and in May, she added an Elsa snowflake at the top.
Her mermaid costume is only about a month old. Certain said she researches everything, so she read up on what swimming skills were required to wear the mono-fin suit, and she passed.
Whether’s she’s swimming around in her backyard pool or at a friend’s house, it’s just fun being a mermaid, she said. She is also booked for a story time at a Conway restaurant in August.
“Nobody gets to tell you how to be an adult,” she said. “I have a great credit score; but I also have a mermaid tail.

”
Then there’s the inflatable dinosaur suit. She’s worn the blow-up costume to take her kids trick-or-treating, and she’s also put a bright-orange vest on the costume to make an appearance at the Conway chapter of Moms Demand Action, of which she is a member.

Certain said she heard one of her sons nonchalantly explaining her dinosaur getup to his friend.
“He said, ‘It’s not weird; she just does that sometimes,’” Certain said.
Moms Demand Action supports “common-sense gun legislation,” she said. She spoke to 3,500 people at the 2018 March for Our Lives rally at the state Capitol.
“I was asked to deliver the moment of silence,” she said.

“They wanted a teacher to do the moment of silence; it was a student-led event.”
Certain wants to run for public office someday.
“I don’t think we can sit on the sidelines; I don’t,” she said.

Even with a political campaign possibly in her future, “I’m very careful never to interject politics [in the classroom],” she said. “Students absolutely have the right to form their own opinions. … I won’t use it as a bully pulpit.
“Until then, I want to make sure the kids, especially the kids I teach — that their voices are heard.

”
And she also has her eye on a Captain Marvel costume.

She said it would be nice to have a superhero costume with pants.
Anything else?
“I don’t know. I didn’t intend to be Elsa. If there’s something that sparks interest … or sparks joy, or something that can help, that’s what I’m going to do,” she said.
That’s just who she is.
Senior writer Tammy Keith can be reached at (501) 327-0370 or tkeith@arkansasonline.com . ADVERTISEMENT.